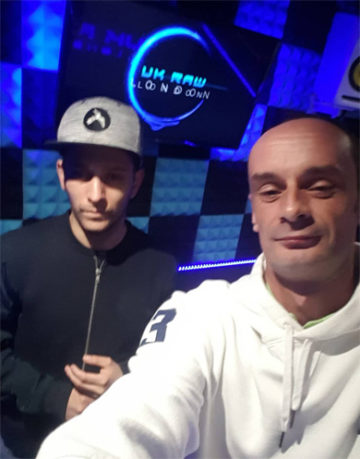 I’m a up & coming uk garage dj residing from West London , I’ve been on the music scene roughly since 1999 , I started buying my 1st vinyl when I was roughly 16 years of ages even before I owned a set of turntables or even knew how to mix as I knew learning to dj was something I had a keen interest in and it wasn’t until I was 18 I brought my 1st pair of technical 1200’s and gradually taught myself how to mix think I practiced about 4 hours a day until I mastered it and it gave me the confidence to give my demo mixes to various record shops around the London area and doing that gave me my 1st break of being a dj on a underground radio station called lush fm and from that I’ve been fortunate enough to make guest appearances on other station after leaving lush fm I was given a show in freeze fm , I’ve played on quote alot of underground stations over the years ,
In 2005 I took a very long break away from the scene and came back on the scene 3 years ago where I was offered a prime time slot 8-10 every Tuesday on UK raw radio with my partners in crime dj jaywalk , mc loopz and now with my resident host mc sneekie , been doing this show for nearly 4 years now and had the privilege of meeting and having some amazing guests down such as mc kie , mc bushkin , mc hyperactive, mc danger k , mc Midas.. the list is endless
So you can catch me and my partner in crime mc sneekie every Thursday 8-10 pm Bi- Weekly playing the best in old and new skool uk garage and with guest mc’s and dj’s